One of the things we know about a criminal record is that it has a significant negative impact on employability. In a 2009 study, researchers found that a criminal record can reduce the likelihood of a job callback by nearly 50 percent (Pager, Western, and Sugie 2009). This study also found that the penalty is double for African American job applicants than for whites (60 percent vs. 30 percent) (Pager et al., 2009).

Restrictions on traditional employment are one of the most prominent collateral consequences of criminal conviction. Collateral consequences are “legal and regulatory sanctions and restrictions that limit or prohibit people with criminal records from accessing employment, occupational licensing, housing, voting, education, and other opportunities” (Council of State Governments Justice Center, National Inventory of Collateral Consequences of Conviction). In 2015 there were over 46,000 documented collateral consequences (Palazzolo, 2015), but the truth is, no one knows how many there are because they are scattered throughout federal, state and local ordinance codebooks.

In an effort to create an inventory of collateral consequences nationwide, the Uniform Law Commission created a model bill, the Collateral Consequences of Conviction Act of 2010 which would require individual states to take inventory of their collateral sanctions.

States, however, have been slow to act on it. Vermont became the first state to enact the legislation in 2014 and to date, is the only state to have done so. As of 2017, the bill has been introduced but not enacted in Nevada, New Mexico, Minnesota and New York (Uniform Law Commission, 2017). 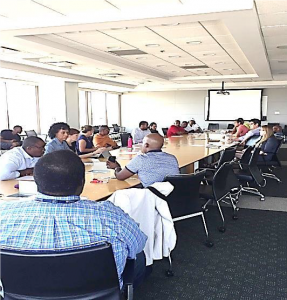 Given the challenges of criminal conviction and its negative impact on employment prospects, returning citizens1 in the District have been pressed to find alternatives to traditional employment. One of those alternatives is small business entrepreneurship.

For the past year, the office of Mayor Muriel Bowser has piloted an intensive 6-month entrepreneurship training and business development program called Aspire to Entrepreneurship. The goal of the program is to help returning citizens open, own, and operate their own businesses in the District. During the training portion of the program, participants receive a stipend from Project Empowerment, a program within the Department of Employment Services (DOES) aimed at helping to reduce economic disparity related to employment barriers in the District.

In the spring of 2017, I met with Kate Mereand-Sinha of the Department of Small and Local Business Development (DSLBD) to learn more about Aspire to Entrepreneurship and the role of small business entrepreneurship for returning citizens in the District. Consistent with the general research findings on the consequences of criminal conviction, Kate noted that 50 percent of returning citizens in the District are unemployed or cannot find employment and this fact led to the development of the pilot program under the DSLBD. She explains that DSLBD and DOES Project Empowerment are only two of several partners in this effort. Other partners include the Capital Area Asset Builders (CAAB) who provide a matched-saving account program to participants, the Court Services and Offender Supervision Agency (CSOSA), Mayor’s Office on Returning Citizen Affairs (MORCA) and the non-profit Changing Perceptions which provides mentorship and community for participants. With its stakeholder model, the partners developed three core principles to drive the program’s implementation and design.

“The first one is meeting people where they are. The second one is building the community. And the third one is building community wealth. We use those principles and tie back all the time to ask ourselves “are we on track?” to make sure we are doing the right thing,” says Kate.

It is because of this open community stakeholder model that I have become an Aspire stakeholder. In addition to the core training program, the program also holds monthly Aspire Stakeholder meetings and We * Aspire networking meetings that are open to anyone interested in networking with or supporting returning citizens in their business development pursuits. It is an open venue, which welcomes ideas, topics, and questions, and which seeks to expand its existing collaboration base of Washington, D.C. government agencies, federal agencies, local-nonprofits, and community volunteers.

For the past year, Kate has been the facilitator of the stakeholder meetings where agenda items include the question of program growth and institutionalization. “We have this small pilot, but how do we get more people to do this kind of work? We have this program and it’s strong. How do we help the idea both take root and fly?” she asks. Every first Friday of the month we have met on the 11th floor boardroom of a Washington, D.C. government building in Judiciary Square to tackle this question and discuss any number of matters related to the program, including the many challenges of program implementation.

In the meetings, we have shared success stories, celebrated victories, provided input into the future of the program, identified barriers to small business development such as licensing restrictions (which is a collateral consequence of criminal conviction), learned about the inner workings of the District government and perhaps, my favorite, practiced business pitches. The diversity in business ideas is extraordinary. At first, I silently sat at the far end of the long boardroom table not saying much and only taking notes. True to their second principle of building a community that can be self-reinforcing while drawing its strength from its network connections, everyone is welcome. I have never felt out of place.

The pilot program has been very successful, receiving a U.S. Conference of Mayors (USCM) DollarWise innovation grant to help expand it. It has recently begun the transition from the pilot phase into a more permanent program within the District government. As more and more cohorts of Aspirants (the term used to describe participants of the program) graduate, the hope among this group of retuning citizens is to build a network of small businesses in the District that will help address the problem of collateral consequences by hiring other returning citizens. 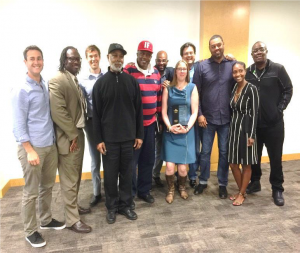