In Grossman Hall in the law building of American University, was a sea of diverse women chatting with one another, laughing, snacking on cheese cubes and patiently waiting in their seats for the main event to begin. From undergraduate to senior scholars wearing yoga pants or pant suits, a diversity of women seemed to be represented among this energized crowd.

On November 2, 2018, I was one of the presenters at “Pathways to Gender Equality: Economic Gender Analysis Addressing Current and Future Challenges,” a conference hosted by the Economics Department of the American University in Washington, D.C.

The opening and closing plenary consisted of an all-star group of women economists including Cecilia Conrad, Bina Agarwal, Janet Yellen, Nancy Folbre, M.V. Lee Badgett, and Maria Floro (among many, many others). The opening plenary was entitled: “Diversifying Economics” and rather than asking the age old adage, ‘What can you do for the economy?’, the speakers at this conference flipped the script, asking: “How does the discipline of economics change when reoriented to address questions of gender equality and inclusion?” (Speaker Mieke Meurs).

While the issue of increasing diversity in higher education (in terms of representation of women and minorities) has long been an institutional goal of U.S. colleges and universities (albeit, a contested one), the discipline of economics has somehow averted these pressures. To that point, the conference began by citing some discouraging statistics, reporting the percent of PhD women graduates and full-professors in economics in 2015 was 31 percent and 12 percent respectively.

Floro noted that the meaning of and implications for diversity reaches far beyond that of simple numerical inclusion, but also includes an explicit understanding of representation and its relationship to creativity, innovation and insight in economics’ theoretical and empirical frameworks, models, and methods, especially when it comes to reducing economic inequality. This interest in diversity has important implications for the discipline and the public.

Floro explains, “The way we depict the economy… the exclusion of experiences and interests, of needs of certain groups, now this has a fundamental impact. It is not just an issue of body of knowledge because economics is highly influential in policy-making. Therefore, the economic policies that come out from that framework that tend to be exclusionary… can represent only and support only the interests of certain groups often at the expense of those excluded.”

To this point, American University has recently inaugurated a new research center: Care Work and the Economy, an interdisciplinary effort to create public and economic policy aimed at reducing inequality produced by the chronic public underinvestment in care provisioning that often directly impacts women’s careers and life choices (CWE, 2018). 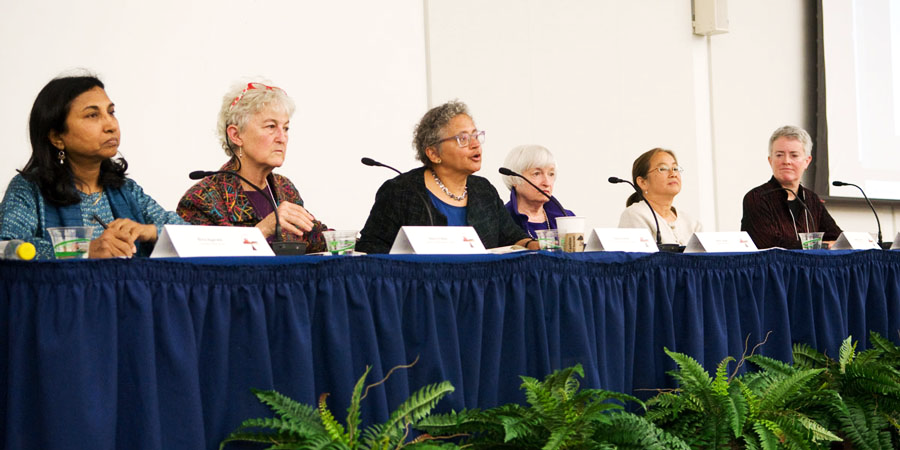 In order to further diversity economics, Floro provides yet another imperative for the economics program at American University: “A multidisciplinary approach and methods is pivotal in understanding how human behavior and decisions are made… we see the need to learn from other social scientists and we make use and encourage our students to diversify in their methods and ask questions that have not been asked before… we, as economists, cannot learn by solely looking and using standard conventional economic tools.”

Sociologists should see this as an exciting development in our sibling discipline, and an opportunity for meaningful collaboration that would contribute to the public good. A diversity of perspectives concerning public issues of economic inequality would lead to better understanding of the complex relationship between economic outcomes and the social conditions and processes that give rise to them. This synergy would also contribute towards effective public and economic policies for groups and economic activities that have historically and traditionally been marginalized or devalued. To wrap up the closing plenary, Heidi Hartmann, president of the Institute for Women’s Policy Research, proposed a reconceptualization of the discipline of economics.

Rather than the traditional conceptualization being a zero-sum game concerning the allocation of scarce resources in a society, she posed the question, “Why don’t we think about economics as the study of social provisioning?” She suggests that if we come to see the economy as a social good, the question then becomes, “How do we make sure everyone is provided for?”

Now, I think this is the conversation public sociologists are having, in existential synchrony with some economists, about producing knowledge for the good of the public interest. The public economists are asking themselves: economics for what and for whom?

Post-Script
If you are interested in learning more about economic gender analysis research in social and economic policy, especially those located in the DMV (District of Columbia, Maryland, Virginia) area, American University has now launched the first U.S. graduate program dedicated to the study of gender and economics.
Please visit https://research.american.edu/careworkeconomy/community/ or https://www.american.edu/cas/economics/news/research-seminars.cfm

CWE (Care Work and the Economy). 2018. Mission and Vision. Accessed via: https://research.american.edu/careworkeconomy/about/mission-vision/