In April 2019, I saw the Evicted exhibit at the National Building Museum. I came to the exhibit having read the book by Matthew Desmond, which has become one of the most influential books on poverty and homelessness in the last few years. I have also read the conversations by housing activists, scholars, and policymakers both praising and critiquing Desmond’s work and his Lab.

As I reflected on the ways data was turned into a comprehensive story of our national eviction problem, what stood out to me most were qualitative stories used to illuminate the personal experience of losing your home.

The first section of the exhibit is set up like a house, with symbolic data visualizations covering the sides. A set of keys to break down women evicted by race, with four of 60 white women, five of 60 Hispanic women, and 12 of 60 Black women experiencing eviction. And, as you walk inside the home, there’s a video playing on loop of one woman’s story that truly pulls you in. The curator’s choice in using stories of employed persons became a call to introspection about our own vulnerabilities.

Two years ago (The Sociologist January 2017), I spoke with Liane Scott, Grassroots DC founder and local activist, about public housing in the District. When I asked her how she came to fight for housing rights, she revealed that she does not necessarily see herself as any more removed from the fight for housing than those who cannot currently afford the private market. She stated, “I related more than I’d like to the struggle for housing and the fear of losing it.” 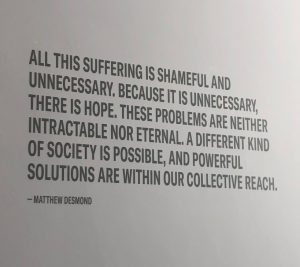 The exhibition features audio from Unfurl Productions, who recruited persons battling eviction cases in Camden, New Jersey. The woman that stood out most to me was a single mom and social worker. She faced eviction, despite her full-time government employment status and education. She was experiencing a not-so-unfamiliar cut in her hours at work and had no means to garner extra income. The social worker who helped her fellow community members find the social safety net in difficult times now needed help.

The exhibition harnesses the imagination by inviting the public to empathize with the housing precarity in our prosperous country.