An art installation in the H Street NE corridor is giving District of Columbia area residents a virtual reality experience of the treacherous journey that refugees and migrants embark upon when entering the U.S. Housed in a former church, CARNE y ARENA (Virtually present, Physically invisible)“explores the human condition of immigrants and refugees,” according to creator and Academy Award winning-director, Alejandro G. Iñárritu.

Based on true accounts of Central American and Mexican refugees and migrants, CARNE y ARENA uses virtual reality technology to “break the dictatorship of the frame—within which things are just observed—and claim the space to allow the visitor to go through a direct experience walking in the immigrants’ feet, under their skin, and into their hearts,” says Iñárritu. The topic of the installation couldn’t be more prescient: the number of forcibly displaced persons increased by 2.9 million in 2017 to a record high of 68.5 million. This steep increase was met with an equally strong rebuff by the Trump administration. The administration’s yearly determination of the number of refugees to be admitted into the United States in fiscal year 2018 was dropped to a record low of 25,000.

The question of how we engage with and are engaged by global inequality is an important sociological question that has been examined through concepts such as the Other (Said 1978) and distant suffering (Boltanski 1999). Engaging with the distant Other is explored through concepts such as pity and empathy. As a discursive mechanism, pity creates a sense of caring for the Other (Chouliaraki 2006). Modern media has further intensified the immediacy of distant suffering. Through modern media such as television and the Internet, the suffering of populations like refugees and migrants have an even greater chance of generating an immediate, emotional reaction by the viewer.

Virtual reality technology, then, would seem to take this experience one step further; it has been recently used with great enthusiasm by Non-Government Organizations (NGOs) for fundraising, as seen with Amnesty International and their #360Syria campaign, which generated an uptick in donations. 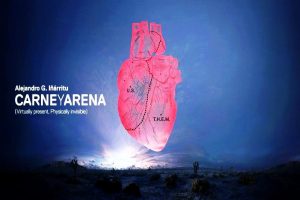 Mediation is lauded by some as overcoming distance in communications, geography, and morality. While media technology may have the capacity to bridge these gaps, it can also create a sense for the viewer that they are privy to reality, when it in fact is always a replication. Iñárritu maintains that the CARNE y ARENA experience “blurs and binds together the superficial lines between subject and bystander…allowing individuals to walk in a vast space and live a fragment of a refugee’s personal journey.”

Charity fundraisers have found that mediated representations were effective in motivating viewers to donate money to their aid campaigns. However, the inundation of images of people suffering from starvation, war, etc., has been criticized for victimization and creating ‘compassion fatigue.’ As a guide for ethical judgment and moral practice, empathy can thus decrease viewers’ sensitivity to people’s suffering when it occurs in larger numbers (Bloom 2017). Mediated representation also raises the question as to how easily virtual reality can dissipate the lines between tourists and vagabonds, as Bauman describes them (1998). Bauman’s tourist is not bounded by nation-state borders and is able to travel more freely by choice.

Vagabonds, on the other hand, do not travel by choice and may only stay in one place as long as they are wanted there. While sociologists like Bauman advocate for shared humanity and connection between distant sufferers and spectators, what are the effects of tourism and art being the main conduits for these experiences? When tourists are seeking novel experiences, will the refugee become a spectacle as one of Bauman’s vagabonds, who must market their ‘otherness’ to tourists (1998)?