The end of the nineteenth century and beginning of the twentieth century marked a new long-distance Albanian emigration pattern that was primarily necessitated by the need for relief from the ubiquitous economic difficulty and regional turmoil afflicting the nation (Çiraku & Vyshka 2014). What began as an economic, male-dominated emigration flow of Albanian citizens into the United States transformed into a family-oriented immigration pattern (Naggi 1988; Vullnetari 2007), only to be interrupted by the formation of Albania’s socialist state and limitations on travel across the nation’s borders.

This paper uses Donald Winnicott’s (1971) concepts of transitional symbols (i.e., phenomena and objects), play, and potential space as elements of immigration and cultural assimilation. Parallels are drawn between Winnicott’s work and the Albanian immigrant’s experience of a new location within a comfort zone that approximates representations of unity with and palpable separation from an old location. Ethnic unity and ethnic separation were considered simultaneously occurring elements of successful immigration, defined as “one where the person [immigrant], after a long period of struggle, is able to amalgamate both past and present [cultural] experiences” (Sengun 2001:66).

Winnicott (1971) discussed the notion of a hypothetical area that exists between an individual and an attachment object during a stage of perceived separation; this area is the potential space between one’s personal reality and  external reality.

This psychological position is where unity with, and separation from, an attachment is simultaneously and constructively experienced through “transitional phenomena,” and the utilization of “transitional objects” as relational tools, to transcend difficulties (e.g., separation anxiety) associated with loss of the attachment (Sengun 2001; Winnicott 1951; 1971). Transitional objects are symbolic representations of one’s unity with and deprivation of an attachment: the object is not necessarily used as it is collectively perceived, but rather related to and assigned meaning by an individual as an isolate.

The illusory importance that is ascribed to the object serves as provisional relief or defense against anxiety caused by separation from an attachment (Winnicott 1951).

Winnicott’s concept of transitional phenomena (mannerisms, patterns, or fixations) are observable and are crucial in the production of a human cultural experience (Lee 2005:102).

“They [family] were always helping each other, and they also would help each other, if they made some money, to pay the passage for someone else to come over here [to America] within their family. If they’re the cousin or another brother or whoever, that is how they brought them, they bring each other. But they would pay their way, the one who had made the money in the United States.”1

Presented as a component of the settlement process in the data, the family is a source of comfort during times of despair or angst. Identifying the family as a transitional symbol offers a look into the Albanian immigrant’s ability to identify with their homeland, yet simultaneously consider their adopted country as their own space. One woman spoke of her father, who had come to America fifteen years prior, and his apprehension to attend night school and learn the English language.

“I went to night school in Boston. And my father said, “Oh, how nice, I wanted to go to night school, but I didn’t feel like going alone, you know. Now that I have you, that you’re going to go, why should I leave you to go at night by yourself and to come home by yourself? We’ll go together, and it’s good for me. Because I’ll learn some English there.”

One may recognize the father’s need for a transitional object, that being his teenage daughter, to offer him a source of relief from the anxiety of detaching from an element of his native land. Not only did a sense of belonging manifest as transitional phenomena in the family, it created a transitional space that embodied Albania as well: “When we walked out the door, we were in the United States of America. And we lived outside just like any other American, but when we came in we spoke Albanian, we lived Albanian inside the home, and we kept our traditions.”2

One woman was asked if she felt any different shortly after her arrival to the United States. Her response: “No, because I came in a house with my sister-law, and all the relatives, they come greet me. I had uncle over here, a lot of cousins. I feel like home. That’s it.”3 Another person spoke of his arrival to the United States as a child; upon reuniting with his only contact here, his older brother, he said, “grabbed me and loved me and kissed me. And he said, “You are with me; he tried to make me feel at home.”4

The family home, as a root, allows an immigrant to consider the dwelling itself as a tangible potential transitional space. Winnicott addressed this potential space as a psychological territory, and these transitional phenomena create an objectively recognizable place that is infused with subjective reality.

“I always go to…relatives, friends, parties, over here, over there. In the church we meet all my, our people. Nothing wrong.”5 Traditions from Albania informed the construction of bonds that were shared amongst Albanian immigrants, resulting in the formation of communities. A uniting force of the Albanian community was the church. The Albanian Orthodox Church became a centrality for Albanian immigration settlement.6,7 This was largely due to the importance of traditional festivities: Christmas, New Year, and Easter were frequently mentioned in the data as communal celebrations.

Upon inquiry, one respondent stated “when you leave home, that you leave a very rich life, you consider yourself punished, in great discomfort to live the way you do.”8 Another immigrant offered a supposition on the importance of the community:

“Rockland was a disappointment to my mother. In ways the climate, for one thing, was much harsher than the Mediterranean climate…She had no one here. Also there were the language difficulty, the food was difficult. …she couldn’t get olive oil at that time, the basic needs. …other people suffered and came here, yes, we all suffered. But we all suffered in an ethnic way. Because everybody grouped themselves with each other, and there was support to one another. The difficulty with my mother was that in Rockland there weren’t that many Albanians.”9

The Albanian communities regaled newly arrived young immigrants with the stories of past Albania. One immigrant said, “at four or five years old you’re not knowledgeable about the land you left. But I know with my people, the stories they tell me, what they left. And I drew from them.”10

These transitional elements of community further cement the connection between the old country and new country, as relation to Albania was nurtured in future generations, but not so much as to limit cultural adaptation: “What they left…I was thankful that I was here.”11 These community spaces are not strictly created by Albanians themselves, but can be externally sourced and adapted to meet the needs associated with attachment loss and willful detachment.

“They just lived, you know, with each other and gave each other great comfort in times when, you know, they didn’t know where to shop, or how to shop, or how to buy,…they had each other.”12 Winnicott regarded this potential space as the position where one may engage in creative play and cultural heritage. The potential space serves as a comfort zone for constructive management of anxiety associated with an immigrant’s separation from ethnic attachment (Sengun 2001; Winnicott 1951; 1971). 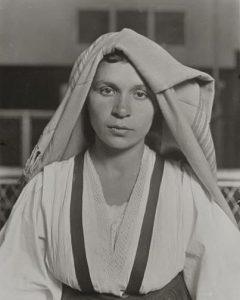 Playing facilitates the experience of the unfamiliar reality. Only in the psychological refuge of the space may play be achieved. As an individual begins to reality test, his or her illusions interchangeably become apperception and perception. (Winnicott, 1971:3).

“I like my country… I am Albania, but I like America, too. … I mix with the people. We, we all belong to, you know, Y.W.C.A…We got mixed [i.e., assimilated].”13 There is a direct development of transitional phenomena, from play to collective play, and from this to cultural experience. According to Winnicott, this cultural experience is developed through creative living that first manifests itself as an extension of play. Creative living refers to the attribution of subjective meaning to external reality, consequentially creating the sense of a life worth living, as opposed to futile compliance with reality.

All that an individual does in life and in relation to a community is creative living:  “It is only in playing [i.e., experimentation] that the individual…is able to be creative,…as one experiences a relation to an object and forms a cultural experience” (Winnicott 1971:54, 98).

As individuals are brought into cultural circumstance and inherit social elements that are internalized, espoused, and expressed as codes of manners and morals, personal realities become reoriented and initiate an individual sense of belonging with the collective whole.

The area of potential space permits an individual to constructively initiate a relationship with a new world, utilizing transitional objects/phenomena to begin individual and collective play that translates into the development of a cultural experience.

As community and family nurtured the Albanian immigrant in their relocation, a new cultural experience formed that was rooted in tradition shared amongst the Albanian group in the United States.  “The things we do I think is to keep our Albanian heritage alive. … I don’t feel that we should ever lose our background. I think that they should always be Albanian. I think that there should always be an Albania.”14

Finally, the tendency for potential space to facilitate play and develop a cultural relationship is dependent on the living experience of separation: a healthy separation allows for a gradual and confident detachment from a culture.

If this separation from a mother culture is too fast or interminable, such as in the case of exile and political refuge, a trauma may occur in which the potential space is compromised; the memory of the internal representation of one’s homeland fades and transitional objects/phenomenon lose meaning, thus inhibiting play and creative experience of a new culture (Winnicott, 1971:15).

On the other side of the spectrum, there may be a case when an attachment is not gradually disillusioned and an immigrant may create a transitional object that symbolizes the attachment to a homeland in its subjective entirety: “The migrant remains dependent on the old frame, keeping the incorporated object in his internal graveyard and projecting it into the new frame instead of being able to use it to grow” (Le Roy 1994:190).

In the event of trauma, there is little trust and reliability in the migrant’s unity with their homeland. The newly settled immigrant experiences an aggressive end to a relationship that would otherwise inform potential spaces and corresponding transitional symbols; this necessitates the formation of new attachment symbols.