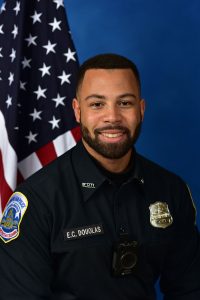 On Monday April 19th, 2021, I had the privilege of interviewing Evan Douglas, a native of Washington, D.C., an ex-D.C. Metropolitan police officer, and current Policy and Advocacy Fellow at the DC Justice Lab. Douglas has dedicated his life to criminal justice reform and making a positive impact in the D.C. community. As an ex-police officer, he has a unique perspective on why police violence and brutality keep occurring and how police reform may be achieved. I spoke with him to learn more about the root sociological causes that drive police violence in the U.S.

April 19th was also the day the jury began deliberating in the trial of Derek Chauvin for the killing of George Floyd.  This specific day, and the last year as a whole, have been salient times for the movement against police and police violence in the U.S. And it was against this background, that Douglas and I discussed alternatives to police, the results to mental health and trauma from police violence, the relation between poverty and police violence, and the phenomenon of police loyalty to each other.

Douglas himself grew up in D.C. He mentioned that negative experiences and trauma from his childhood led him to join the D.C. police. Douglas believed that he could be a guardian for D.C.’s Black communities as a police officer. However, he now pursues change through policy, advocacy, and academia. In 2019, Douglas returned to school to pursue his master’s in criminology at the George Washington University. Douglas recognizes that his childhood trauma from growing up in a predominantly Black and impoverished area, is not an isolated occurrence. He cites how D.C. neighborhoods often exist in different realities even though they stand so close to each other. The communities east of the Anacostia River in Southeast D.C. exist in intense poverty; with struggling schools, food deserts, and a lack of consistent job opportunities. The neighborhoods of Southeast D.C. struggle while Georgetown and the Palisades thrive. Douglas also mentioned that Southeast D.C. lives in the shadow of the Capitol, a place where aid and reform should, theoretically, come from.

Douglas was–and still is–motivated to understand why and how the disparities in D.C. became so dramatic. He said it took him some time and education to understand that poverty and crime are not the result of individual actions but arise largely out of the social environment.  Douglas cites his education as a driving force behind his pursuit of criminal justice reform and desire to learn how people arrived at the social position they are in. He wants to learn about how factors such as race, poverty, education, and physical environment intersect to cause harm to communities. Douglas also believes that these same contributing factors can lead to negative interactions with police and eventually cause police violence. He, along with others who explore this problem, believe that intervention strategies and changes in an individual’s social environment minimize the need for interactions with police in the long term.  Douglas reflects that policing is almost entirely reactionary, occurring largely after a crime occurs. By addressing a crime that already occurred, police are not solving crime systemically or in the long term. The goal to Douglas is to change the environments people are raised and socialized in, with the goal of eventually no longer needing police. 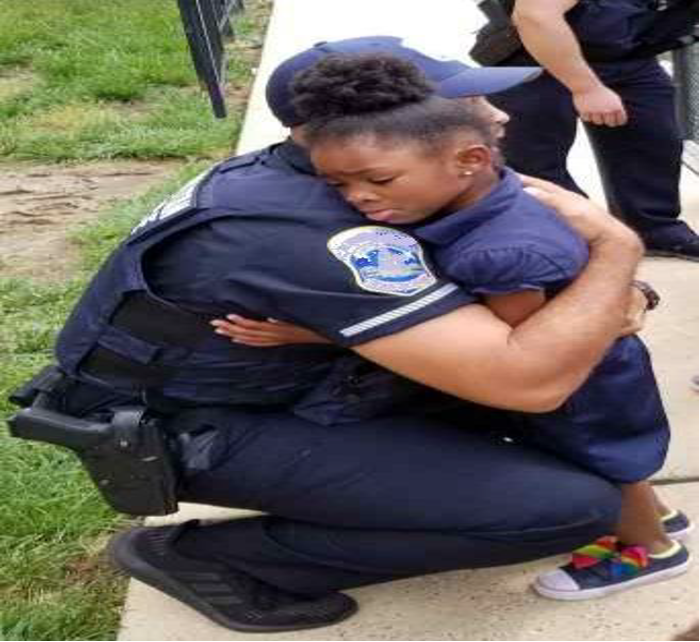 In 2019, Douglas and his former MPD partner were doing their usual drive through Ward 8. They saw a group of children playing outside a Day Care Center and decided to say hi. Most kids ran up to the two officers excited and smiling. However, one girl, pictured above, was timid and crying. The girl’s father had been recently arrested in front of her. This is why on a separate call I had with him, Douglas says this picture is not “cute” or “wholesome”. Douglas believes the photo and young girl’s experience is “traumatic” and “devastating”. Douglas captioned the photo with this quote: “Policy and procedure change can only go so far but how do we start to heal and undo the trauma that has already been done?”

Douglas also recognizes the fundamental relationship between race and policing. In the context of George Floyd’s murder and Derek Chauvin’s trial, Douglas stated that he believes police officers and police departments fail to recognize the facts. The facts are that the cornerstones of policing are rooted in racism and white supremacy. Douglas believes that policing is upholding racial disparities and maintaining a racist architecture that needs to be toppled. The connection between race and policing can be interpreted as part of the larger racial formation that produces disparities in the criminal justice system. The intertwining institutions of our criminal justice system can be, and have been historically, used to oppress certain populations; Douglas explains this by mentioning how Black and brown populations are often labeled as “deviant” by law enforcement and therefore subject to intense police surveillance and control.

One component of policing that I asked Douglas about was trust. Is there any mutual trust between police and Black and brown communities in cities across the United States? Douglas says that law enforcement has never had full trust or legitimacy in these communities.

He mentions corruption, violence, and killings at the hands of police and other institutions in the criminal justice system as reasons why that trust has never been maintained. He claims that individuals may have micro-level trust of police based on individual interactions or what they see in the media. However, there has never been macro-level trust of police in Black and brown communities, especially in cities like D.C. An individual officer, much like Douglas was, cannot outweigh the macro-level discrimination and harm the institution of policing inflicts.

In the context of the murder of George Floyd and killing of Daunte Wright, I wanted to ask Douglas, as a former officer, if he believed that the “blue wall of silence” was real. Do officers really defend each other even when they clearly murdered someone? Officers and other law enforcement officials seemed to proudly support and defend the actions of Chauvin and Kimberly Potter, who is charged with manslaughter in the death of Wright, so I wanted to ask Douglas how widespread this phenomenon was.

Douglas says the theories about the blue wall are absolutely true. He said policing is an institution that “steamrolls individuals”.

My interview with Douglas went to a very common, yet important, question with sociological and political impact: should we defund the police? Douglas believes the eventual answer should be yes; that public funding and effort should be pushed towards education, health care, improving the physical environment, and other community programs instead of policing. By specifically focusing on these public safety tools instead of policing, poor Black and brown communities will hopefully have fewer and fewer interactions with law enforcement.

Douglas experienced police forces and policing firsthand. He recognizes that policing issues are systemic and disproportionately harm marginalized communities. Therefore, according to Douglas, the goal of criminal justice reform should be to entirely rethink public safety and move society away from police.

Douglas likes to work back from the outcomes when analyzing a situation. We talked about the terrible carjacking and beating of two teenage girls in D.C. just this year. Douglas wants people to ask the questions “how did they get here?” and “why aren’t they in school?” The reality is that children and students in poor Black and brown communities often have little to no adult guidance during the day, no safe green spaces to go, no individual mentoring, and no indoor community centers to go to after school. Instead of funding policing, Douglas says, we should reallocate significantly more funding to these programs that are currently almost nonexistent in underfunded communities. In doing this the goal is to avoid having police as the first tool for public safety.

Douglas wants to be optimistic and say he sees a future with no police. However, for now, he wants to see the neighborhoods of Southeast D.C. policed more like Georgetown or Beverly Hills. Communities where police violence is rare and there is plenty of money to address public safety without police. These White and upper-class neighborhoods experience a completely different relationship with police than those in ultra-policed, poor, Black, and urban environments. Douglas believes that most of the time, residents of these Black and brown communities will see police as a threat rather than a public safety tool. He mentioned, however, that there will be outlier cases wherein a resident of these communities does feel as if the police are a reasonable public safety tool.

Douglas’s sentiment echoes that of many activists and leaders who are frustrated and angry over policing in this country. Determinants like race, zip code, age, class, and education influence how one feels about the police. More importantly, these sociological determinants also impact the likelihood that one experiences police violence.

Douglas provides a unique perspective on the entire situation because of his time serving as a police officer. He understands the problematic nature of current policing across the country. He wants to see public safety rethought to prioritize community groups, education, green spaces, and more neighborhood services. Right now, it is clear police are being used too much and causing too much harm and trauma on Black and brown communities across the United States.

2 comments on “Interview with Evan Douglas: How Can We Reduce the Sociological Contributors to Police Violence?”