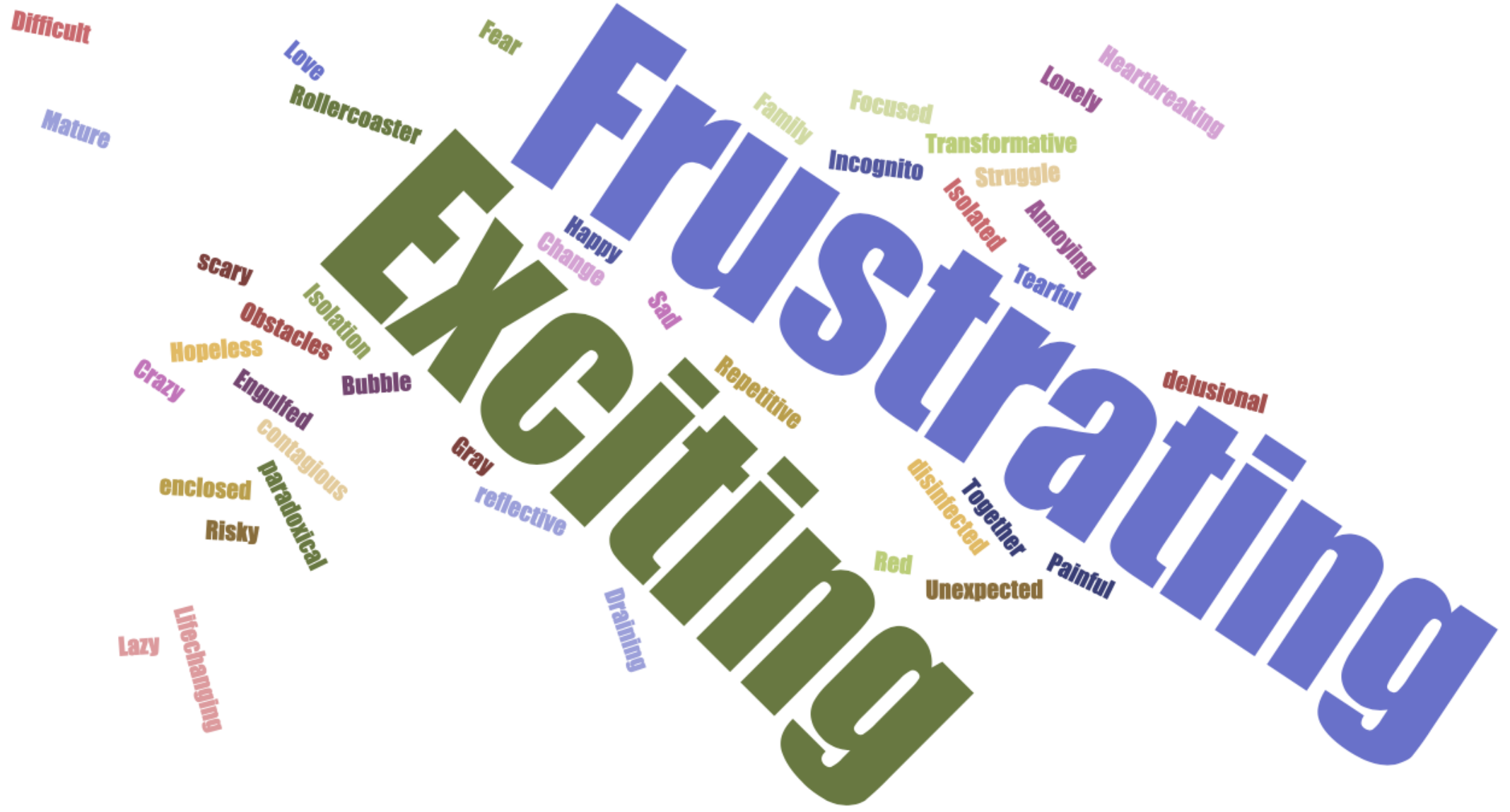 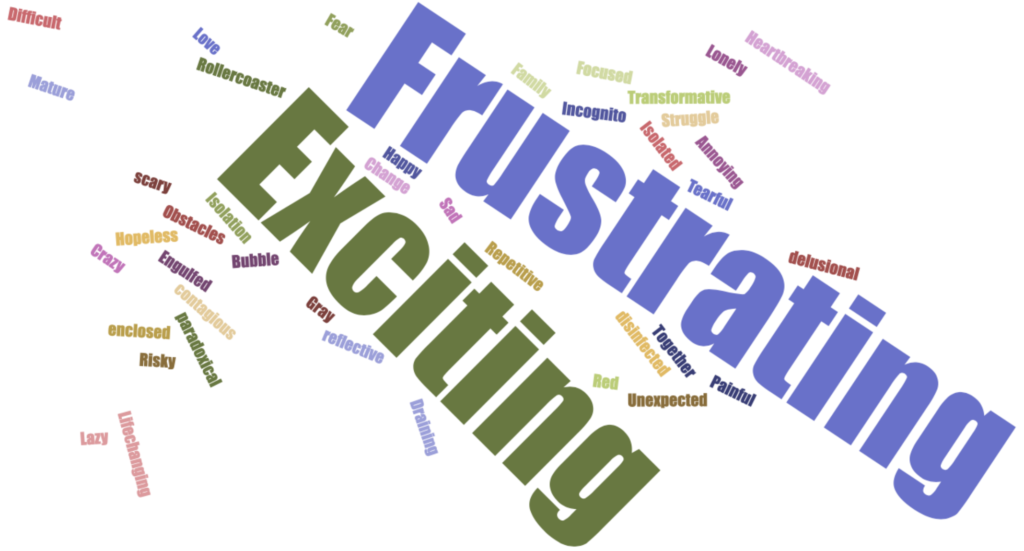 As the end of the pandemic seemed to be around the corner many students reflected on the past year. Some found it to be a wonderful self-journey where they discovered themselves in ways they could not have imagined, and others were stuck in an endless cycle of doing nothing. Conducting interviews with students in the D.C. area, it became clear how differently people are going to remember the year of the pandemic, depending on where they spent it.

Those at home with their families frequently felt “stuck” while those who had the luxury of living in D.C. for most of the pandemic remember how fun the last year was. Although Covid-19 plagued their thoughts, they were still able to socialize in small groups and form connections through this shared trauma. Connor Leary a, full-time senior at GWU reflected on the friendships he made during the pandemic. “Yeah, the pandemic allowed me to focus on myself and helped me realize which of my friends actually cared and who did not. Friendships required work during the pandemic and you could tell who tried. Before the pandemic, I was stretched thin with classes, socializing, and an internship and it just became too much and Covid-19 prevented me from having a breakdown.”  The world slowed down and allowed him to pause and reflect on what he needed to do to become happy again. Although he wished that in-person school had returned in the fall, he was thankful for the time he had for himself. As Connor put it, the pandemic stole from many people, but it was also a gift to some.

Robyn Moore, a Ph.D. student at the University of Maryland, College Park shared in Connor’s good fortune of positive pandemic experiences. Robyn spoke about how before Covid-19 she was working an unhealthy number of hours at her job and was living there part time. She was also dealing with classes and stretched thin, just like Connor Leary. After the pandemic started, she was forced her to stay home. She realized how unhealthy her lifestyle had been and how she wanted more time for herself. Robyn began developing her creative side by painting and planning fun new sociological classes based on topics such as the hit show “Buffy the Vampire Slayer.” Robyn is a great example of how people who could quarantine often became so bored they decided to branch out. Not only was she doing these new activities, but she was doing them on Zoom with fellow bored grad students.

However, not every student was doing something new, myself included, and the pandemic also allowed for those of us doing nothing not to have to feel bad about themselves.

Deniz Giray, a local Puerto Rican who attends GWU, reflects on how happy the pandemic made her parents. They were very pleased to spend as much time as they could with Deniz before the pandemic ended and she moved back to D.C. Deniz describes going back to living full-time with her parents as time-traveling back to high school. They would cook together, watch movies, and, most importantly, talk about themselves. This pandemic allowed Deniz and her family to speak about their past experiences and become closer together. Nina Mewborne, who attends American University, had a similar experience of bonding with her family in ways she could not before. She remembers that when her mother was diagnosed with breast cancer during Covid-19, her family isolated to an extreme. On top of that, they had to deal with the stress of living in Texas with anti-maskers and lenient public health policy. Nina would count the days since she had last touched another person outside her immediate family and got up to 380 days. This extreme isolation forced Nina and her parents’ relationship to adapt to be more of a friendship in response to what they all needed, and she was very thankful for that. She comments that her relationship with her parents is much more advanced than other kids her age and the pandemic was the main cause of that. Nina looks back at Covid-19 and remembers the beginning as a blissful time where she got to be with her family one last time but then, as the pandemic continued, she realized she could not see the light at the end of the tunnel and this blissful feeling became fear.

Another student at GWU, Leonela Tasé Sueiro, left home in the middle of the pandemic to live with her boyfriend in Ecuador. She loved being at home, but her grandparents, who lived in Cuba, had been forced to stay in the U.S. with her because of Covid-19. With Leonela’s grandparents, parents, and sibling all at home it began to feel cramped for her. She describes leaving her grandparents as “freeing because I do not have to worry about getting them infected,” though Leonela and her family tried not to let Covid-19 dominate their thoughts. Many students had the same mindset as Leonela, not worried about getting Covid-19 and dying but instead worried about passing it to family members who were at higher risk. Another gift of Covid-19 for Leonela was the freedom to stay in Ecuador for such a long period. Without online classes, this would not have been possible for her.

Ellie, a student at the University of Chapel Hill who lived in Austria with her mother during quarantine, has a different story–she envied students who were back in the U.S. She talks about how hard it was to adjust to the six-hour time zone difference and how going to bed at 3 a.m. made it difficult to fully grasp classes. Leonela had a similar experience: during the second week of classes, one of her teachers decided Zoom was not working for him and told the class they would not be meeting synchronously at all. One of the reasons Leonela loves college is the interaction with teachers and the discussions she had with both teachers and students. Leonela was deprived of this and ended up having to use the pass/fail grading option, which disappointed her.

But their experiences are the ones Marx names–the isolation from the pleasure to work, loss of control over our bodies, the absence of cooperative experience with others, and the loss of pleasure in the product of the work.   Many students may have felt alienated from their schoolwork because the pleasure in working was removed by having to stay up so late or teachers not accommodating to an online format or abroad students. They were also prevented from making new friendships and having discourse with new peers. Sarina Wise, who attends Georgetown University, reflects on how hard it was being a first year at a new school. Covid-19 made making friends much harder for Sarina, and she talked about how she had FOMO, fear of missing out. Sarina also discussed how hard it was to get the motivation to do schoolwork, and how even when she did it was hard to retain the information. She reflects that when the pandemic is over and she looks back at her life she will mostly think of negatives. Along with the social separation that made making friends almost impossible, there was also a lack of control over one’s time.  Ellie, for example, had to work within the mandatory curfew in Austria, as well as the time difference that caused her classes to disrupt her sleep cycle.

Connor spoke about how mass shootings are starting to return to his mind as crowds begin to return to public spaces. Since the pandemic started such shootings had disappeared from Connor’s mind, and his anxiety about them was at an all-time low. But now he thinks mass shootings are going to be on the rise again. Connor’s fears were shared by scholars of gun violence; NBC News cites Seamus McGraw, the author of the forthcoming “From a Taller Tower: The Rise of the American Mass Shooter,” as worrying that “this is a moment in time when we’re finally coming out after months of hiding in the shadows from Covid, and I deeply fear we’re going to see another spate of mass shootings.”[1]

When thinking of Covid-19 experiences it’s hard to not think in the binary of good and bad, but many people have had experiences that do not fit in this. At the end of these interviews, it became clear how all these individuals went through nominally the same pandemic, but will remember it very differently; and in ways that reveal the nuanced effects a global disruption of our lives can create.

These interviews were conducted virtually on Zoom. I began by creating two groups of students and two sets of questions. The groups were based on covid-19 experiences and how unique the students’ pandemics were. For example, the students who were abroad were all grouped together and I used the same set of questions for every student in that group. The second group was composed of students who lived in the DMV area or did classes at a school in the area. This group got the second set of questions. I did this to help me find common themes between the students. Even though I used the same two sets of questions, every interview differed a lot because I would tend to go off script to get a better understanding of a student’s particular answer.

[1]Corky Siemaszko. n.d. “After Two Mass Shootings, Americans Ask: Is This What a Return to Normal Looks Like?” NBC News. Retrieved September 23, 2021 (https://www.nbcnews.com/news/us-news/after-two-mass-shootings-americans-ask-what-return-normal-looks-n1261841).