In October of 2019, U.S. District Court Judge Allison Burroughs decided that Harvard College’s consideration of race in undergraduate admissions was constitutional. The decades long conservative-led legal challenges to affirmative action had finally landed at Harvard College. This was significant because the landmark Supreme Court decision in Bakke v. Regents of University of California (1978) upheld Harvard’s affirmative action as the ideal application of race-conscious admissions. This plan centered on holistic review, or the consideration of race amidst a broad range of factors—and with race not being the determining factor.

However, this challenge to affirmative action at Harvard differed from previous cases and the lawsuits launched by the same body, Students for Fair Admissions, and its parent organization, the Project on Fair Representation. In Students for Fair Admissions v. Harvard College, conservative activist Edward Blum had selected Asian plaintiffs rather than White women, the preferred lead plaintiffs in anti-affirmative action cases since the early 1990s. In this case, Asian plaintiffs claimed that affirmative action, or the consideration of the race of underrepresented applicants—Black and Latino candidates—discriminated against Asians, violating their equal protection under the law.

Rather than motivated by an organic, sincere concern regarding anti-Asian discrimination in admissions—a legitimate matter considering the lower scores on subjective characteristics such as likability and courage of Asian applicants—it is important to consider this matter as yet another test case in challenging affirmative action throughout the field of higher education, with modifications made to federal court tactics. In my book, To Fulfill These Rights: Political Struggle over Affirmative Action and Open Admissions (Columbia University Press 2019), I consider these admissions policies as primary locations of race and class conflict in the post-civil rights period, and I examine a variety of tactics and racial political strategies utilized by conservative organizations to eliminate affirmative action and open admissions in a variety of local and national contexts.

Why has political conflict persisted so long and what does it tell us about racial politics in the post-civil rights period? To Fulfill These Rights answers these questions by analyzing fifty years of political contention over the adoption and rollback of affirmative action and open admissions (or open enrollment policies at less selective institutions).

Through political struggle, a variety of political actors (including conservative organizations and think tanks, liberal administrators and legislators, and progressive and radical students) uphold and challenge the racial common sense of post-civil rights America. In contrast to the Jim Crow period, in which outright racial domination primarily characterized the racial landscape, the conflictual racial logics of diversity and colorblindness play a particular role in consolidating power in the post-civil rights era. These racial logics have been primarily shaped through struggle over affirmative action, with conservative organizations aiming to assert colorblindness through the elimination of affirmative action, and with selective universities aiming to uphold the legally defensible practice of diversity on campuses, now a commodity that signifies a well-rounded, progressive education.

As the racial logic of diversity has been institutionalized in higher education and beyond (however vaguely and underspecified), conservative challenges to affirmative action have been met with considerable opposition. To Fulfill These Rights traces this highly publicized tug-of-war through attention to adoption and rollback of affirmative action at University of California, University of Michigan, and University of Texas-Austin, and open admissions in the senior colleges of the City University of New York system. 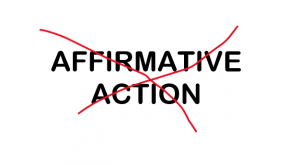 While the consideration of race in admissions for the purpose of constituting diverse classes is still legal, conservatives have effectively restricted the means by which universities implement affirmative action, have legally elevated colorblind methods for achieving diversity, and have legally legitimated notions of White victimization by affirmative action. Tactically, Blum conflates Asian discrimination with perceived White victimization, as a means to overturn affirmative action at Harvard. Mobilizing the model minority stereotype, Blum pits the test scores of Asian applicants against those of Black and Latinx applicants, arguing that Black and Latinx students do not deserve admission. Yet research shows that Asian applicants with disproportionately higher test scores are admitted at rates lower than White applicants, demonstrating that Asians are held to higher standards than White students (Chin et al 1996; Kidder 2006).

Thus, even if affirmative action was eliminated, Asians would likely still be disadvantaged in admissions as compared to Whites, especially in elite universities where legacy status, wealth, and social networks play an important role in admissions.

Additionally, these anti-affirmative action lawsuits assume that admissions to elite institutions are (and have historically been) meritocratic, when, in reality, elite institutions have always developed admissions criteria in accordance to their own institutional priorities, rather than solely by grades and test scores (Karabel 2005). Universities are motivated to preserve affirmative action because diversity has become an important commodity, and also, because universities aim to maintain institutional autonomy.

By potentially limiting which students can be admitted, universities might lose the ability to target tuition-paying legacy students, wealthy donor families, and profitable student athletes. This is why, when a race-neutral admissions policy had been implemented in the University of Texas system (the Texas Ten Percent Plan) after an affirmative action ban, the University of Texas-Austin admissions director and university president still publicly rejected the policy. The new policy had been relatively effective at maintaining similar numbers of underrepresented students at the flagship institution (Thompson and Tobias 2000). To the university president and admissions director, the ban interfered with their ability to compose their classes, with the majority of the student body automatically admitted by being in the top ten percent of their high school classes. For this reason, elite institutions will always appeal legal decisions that reject their ability to consider race in admissions.

It is a contemporary example of what critical race theorists refer to as interest convergence—where Black interests in achieving racial equality are supported when it converges with the interest of Whites (Bell 1980). Here, the interest in maintaining affirmative action (originally developed as a means of desegregation) aligns with university administrators’ desire to maintain institutional autonomy.

As the Supreme Court currently leans rightward, and Donald Trump is still president, this is an advantageous time for an anti-affirmative action case to be heard in the highest court. Blum will appeal the Students for Fair Admissions v. Harvard decision, and is also engaged in a variety of other anti-civil rights cases, including a challenge to affirmative action at the University of North Carolina, a challenge to the California Voting Rights Act, a challenge to minority representation on the Texas State Bar, and other cases in earlier stages of development. This is an important reminder that we cannot understand anti-affirmative action cases in isolation. These conservative challenges are part of a larger movement to limit civil and social citizenship in the neoliberal post-civil rights period.

Karabel, J. (2005). The Chosen: The Hidden History of Admission and Exclusion at Harvard, Yale, and Princeton. Boston: Mariner