Earth Day 2017 will be remembered for more than the usual day of service, recycling drives, and tree planting. On the morning of April 22, thousands of people descended on the National Mall (in Washington, DC) for the March for Science while over 600 satellite marches occurred around the globe. Signs ranged from “Grab Him By the Period Table” referencing the abhorrent Access Hollywood tapes that surfaced during the 2016 presidential campaign, to “I’m With Her,” a clear play on the Clinton campaign with an arrow pointing to the planet.

Among the signs of chemistry, biology, and environmental puns were some familiar references to the sociological eye. On March 21, 2017, the American Sociological Association (ASA) announced they were partnering with the March for Science, calling sociologists around the globe to gather at their respective marches to stand for sociology. And gather they did.

On the morning of the march, the K Street office of the ASA was packed with sociologists from Washington, DC to San Francisco, gathering for breakfast before the day’s events. In their outreach efforts, the ASA suggested three statements for signs: “Good Public Policy Needs Sociology,” “Are Marches Effective? Ask A Sociologist,” and “Sociology: The Science of Us.” These signs, along with a few other creative ones, such as “What the Foucault?” and “This Is Not Normal” with an arrow pointing outside of a bell curve, were all around the National Mall and throughout the satellite marches. Meanwhile the #March4Sociology hashtag brought together sociologists marching around the globe via social media to share their experiences.

While well-represented, scientists as a whole were not all in agreement that the March for Science was the right move. According to a New York Times article published five days before the march, some saw this as a politicization of science that would only result in increasing the perception that science is nothing more than partisan ideology (Roston 2017). Yet, the March organizers remained committed to a nonpartisan march that “champions robustly funded and publicly communicated science as a pillar of human freedom and prosperity” (March for Science 2017). Considering Burawoy’s (2005) ASA presidential address that spurred over a decade of ongoing conversations and debates on sociology’s relationship to the public, a march sponsored and supported by the ASA highlights both the ongoing transformation of the discipline and the complicated times in which we find ourselves. 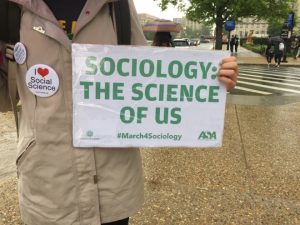 I found a few hours in the day to sneak off to my neighborhood coffee shop in Washington, DC where I took a break from the day’s activities to work on a paper due the following week. The coffee shop was full of individuals wrapping their signs with clear packaging tape to protect their messages from the forecasted rain before heading to the mall. I struck up conversation with a couple next to me, giving them some guidance on the bus routes. I wished them luck and said I would be out there soon as well.

One of them, a molecular biologist, asked, “Are you a scientist too?” To which I replied: “Well, sort of. A social scientist. I am a sociology PhD student.” She responded: “You’re absolutely a scientist. We all have to stand together during this time. Who cares about the subtitle?”

As a young sociologist with an admittedly newfound commitment to showing up and making a public statement in the era of Trumpism, I find myself reflecting on the nature of activism often. What is new? What has always been true, but not clear to me as a privileged woman in the academy? It seems activism is not and can no longer be about simple policy recommendations, but about gauging the public imagination on what we are willing to hold as fundamentally important, such as the ability to explore and debate empirically without threat of retaliation.

This activism comes in the form of marches and protests, but also in the ongoing commitment to imagine and create alternatives in the future through a robust solidarity and forged alliances.

Funding wars that have loomed in the academy over the past decade have pitted disciplines against one another to prove their scientific worth. Sociology has arguably not been immune to the effects of funding crises as departments feel the pinch to prove their relevance and establish themselves as a “respectable social science” (Dinerstein 2017). Less than a week after the March for Science, President Donald Trump delivered the keynote speech at the National Rifle Association’s (NRA) annual convention in Atlanta. During the convention, NRA CEO Wayne LaPierre named “academic elites” as one of America’s “greatest domestic threats” (National Public Radio 2017). 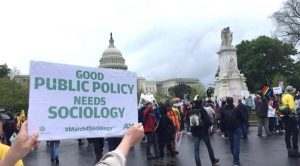 Theorizing and contemplating the politics of solidarity and alliances has a long history in the social sciences and the humanities, and scholarship provides a robust critique of solidarity that artificially erases unequal power relations, but returns us to the importance of true coalitions again and again. Whether it is the March for Science, the Women’s March, or the Tax March, the power distribution among constituents must and should be historicized. As Alicia Garza (2017) suggests in her reflective post-Women’s March article: “No one is safe from the transition this country is undergoing … Simply said, we need each other, and we need leadership and strategy.”

As with the other mass mobilization marches that have taken place over the last few months, the question remains as to whether or not the March for Science is a brief moment of solidarity, or the beginning of a broad collaboration to speak for a better future. Ana Dinerstein (2017) suggests that: “The creation of utopias, as expressions of the desire for a better way of being or living, is the proper and distinctive method of sociology” (p. 14-15). Certainly sociology should remain a contributing voice to the conversation about a future beyond the limited possibilities we currently allow ourselves to imagine.

Garza, Alicia. 2017. “Our cynicism will not build a movement. Collaboration will.” Mic, January 22.