On the heels of the 50th anniversary of the President’s Commission on Law Enforcement and the Administration of Justice, and the publication of the report, The Challenge of Crime in a Free Society, we are once again revisiting the need for a new crime commission in the 21st century. Appointed by President Lyndon B. Johnson, this commission is also known as the Johnson Crime Commission and the goal of its work in 1965 was to “examine every facet of crime and law enforcement in America” (U.S. President’s Commission on Law Enforcement and the Administration of Justice 1967). In response to what was perceived to be the Nation’s rapidly escalating crime problem at the time, this two-year undertaking, staffed by 19 commissioners, 63 staff members, and 175 consultants, yielded an impressive 300+ page report with over 200 specific recommendations on improving public safety and the administration of justice.

The report indeed reflects a comprehensive effort and deep dive into the causes of various forms of crime and criminality perceived to be afflicting the country at the time, such as juvenile delinquency, youth crime, and organized crime. It is also in large part due to this report that our understanding of the administration of justice in America as a “system” became solidified in our minds. The commission also set the stage for the creation of a federal research arm tasked with widening our scientific understanding of how this system and its system components (i.e. the police, courts, corrections etc.) work. As such, this national effort has been widely credited with improving our understanding of crime and the American criminal justice system and “creating [justice] institutions and practices that are still in place today” (Lum and Gest 2018). Some of these institutions and practices have subsequently been heavily criticized as having set the stage for the era of mass incarceration that soon followed. Regardless of its positives or negatives, the legacy of this report in shaping criminal justice policy in the subsequent five decades cannot be overstated.

In 2017, the call for the creation of a new crime commission in the 21st century began to ring loud. Introduced by Senators Gary Peters, Lindsey Graham and John Cornyn, the National Criminal Justice Commission Act of 20171 is backed by a bi-partisan group of senators, civil rights and law enforcement groups (Jackman 2017). Its core goals include the reduction of crime and improvement of public safety, as well as the administration of justice. Its proposed methodology, an 18-month comprehensive review, overseen by over a dozen commissioners with the goal of yielding recommendations, is also strikingly similar to the goals and methods of the Johnson crime commission.

In response to this prospect for the first comprehensive review of the American criminal justice system in over 50 years, the Center for Evidence Based Crime Policy at George Mason University set out to address the following question: What would a new crime commission accomplish? What could it add? In April 2018, over a dozen scholars gathered to address these questions at the Center’s congressional briefing on criminal justice in the United States entitled Lessons from the Past, Prospects for a New Crime Commission.2 Among the contributors to this discussion were Senator Gary Peters, who sponsored the bill, and scholars such as Alfred Blumstein who participated in the 1965 commission. These scholars would like to lay the groundwork for what a new commission should address through their contributions to the journal Criminology & Public Policy (Special Issue on the 1967 Crime Commission Report).3 The areas identified included science and technology, juvenile crime, the courts, prosecutorial discretion, sentencing, correctional rehabilitation, the police, race, crime and criminal justice, narcotics and drug abuse, firearms, domestic violence and criminal justice statistics. 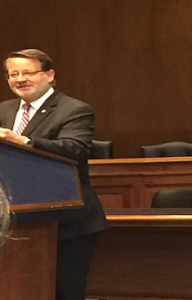 Many of these topics were covered in the 1967 report and while there is always a need to update the body of knowledge, the congressional briefing left me wondering why another aspect of the criminal justice system, which is prisoner reentry, did not seem more of a focal concern. Although prisoner reentry within the purview of corrections is addressed by some of the scholars (MacKenzie and Lattimore 2018), the dynamics of reentry seem to be overlooked.  Indisputably, the institution of mass incarceration presents a crucial difference between societal conditions of 50 years ago and those of today.

Reversing the era of mass incarceration, which is routinely traced back to the 1970s and the War on Drugs, is a key agenda item informing much of the 21st century criminal justice reform work. Whereas the challenge of crime in a free society was the problem that led to the appointment of the original crime commission, it would seem that the challenge of reentry in a free society should really be driving the agenda for the new crime commission.

While the 1967 President’s Crime Commission is considered a landmark in the history of reform, it is far from the starting point. As we look toward reform in the 21st century, there is a real risk of re-inventing the wheel, so to speak, and of recreating conditions that work to maintain the system of crime and incarceration that characterizes America rather than transforming it. In looking toward the future of reform, it is important to recognize that there is a much longer history of criminal justice reform efforts whose relationship to crime and incarceration we know little about. Over the summer, I had the opportunity conduct an archival review of some of these earlier 20th century efforts in criminal justice reform as part of a summer research fellowship. My aim was to understand how the reform efforts of the past 100 years (and not just the past 50 years) have contributed to the design and construction of the American criminal justice system that is the target of reform today.

The reform efforts I reviewed encompass both small and large scale undertakings by early 20th century reformers to create a system for administering justice in America and its improvement over time. These efforts arguably begin with the Cleveland study (1920s) credited with creating a blue print for reform and include at least a dozen more leading up to the Johnson Crime Commission and Brown Commission in the 1960s.

However, as the movement for 21st century criminal justice reform grows (a movement that at the moment seems to be squarely focused on de-incarceration), we have the opportunity to ask critical questions about the normative structure of the American criminal justice system and to challenge the politics that led to its design.  However, in order to do so, the agenda for a new commission on criminal justice reform will need to expand beyond study of the system itself. A new commission should also consider the societal conditions that maintain this system.

MacKenzie, Doris L. and Pamela K. Lattimore. 2018. “To Rehabilitate or Not to Rehabilitate: That Is the Question for Corrections!” Criminology & Public Policy 17(2):355–77.

U.S. President’s Commission on Law Enforcement and the Administration of Justice. 1967. The Challenge of Crime in a Free Society. Washington, D.C: United States Government Printing Office.