Multiple studies conducted by researchers in the field of sociology have revealed that culture’s moderation of self-esteem in adolescents is unlike its moderation in any other age group. The discrepancies across age groups can be supported by the fact that teenagers are impressionable at such a young age and lack secure identities (Bleidorn et al. 2016). Self-esteem is something all humans possess and are constantly striving to improve (Flynn 2003). It is important to look at self-esteem from a cultural aspect to pinpoint where adequate behavioral changes should be made to improve it. Not only do the behaviors, attitudes, and values of adolescent culture have a direct correlation with their self-esteem, culture undoubtedly fosters the development of an adolescent’s sense of self in society.

Culture moderates the level of self-esteem in an individual because it contains certain aspects of their lives, such as their values and beliefs, which become the forefront of how one measures their worth. Self-esteem is a holistic concept, and it is not only impacted from within, but by one’s surroundings as well. This social construct encompasses cultural values and how society places importance on those values (Louis 2014). It reflects the dominant values in any given individual’s culture (Becker, et. al 2016). Many professionals in the field of sociology, have researched the significance of one’s environment on the overall self-concept. The former Professor of Sociology at University of Maryland, Morris Rosenberg, often asked questions about how social life, daily interactions, and social structures all play a role in shaping who an individual is and wishes to be (Rosenberg 1965).

Culture contains all the factors that could play a role in developing one’s self-esteem including race, socioeconomic class, gender and age (Myers et al. 2011). Looking at the race aspect, African Americans generally receive personal self-esteem because of reflected appraisal from their community but receive a lower personal efficacy because of social and economic inequality. This reveals that race can influence the level of self-esteem. From a socio-economic aspect, a study of 918 early adolescents from lower and upper middle-class families in Colombia and Quebec was conducted on how they would fare on a self-esteem scale (Santo et. al 2013). Researchers found that the self-esteem of teenagers was affected by contextual factors like race, gender, familial background, and social class. These factors ultimately cause the discrepancies in self-esteem across cultures.

Self-esteem occurs when a person internalizes cultural values (Becker et al. 2014). Since all people are different in their own ways, the way they perceive the world and themselves in it will differ as well. The relationship between culture and self-esteem is critical in understanding its influence on adolescents. The environment of a teenager ultimately impacts how they perceive their worth because of different aspects of their surroundings.

When looking at self-esteem, one must consider the ever-growing adolescent mind. As the adolescent mind is underdeveloped, cultural differences have a substantial impact on the evolution of their psyche. In a study included in the Archives of Scientific Psychology, results showed that sociocultural differences actually moderate self-esteem across the ages. The presence of cultural differences was more prominent during adolescence than any other age period. (Helwig and Ruprecht 2017). “Adolescence can be a time of disorientation and discovery” as the adolescent experiences opposing ideals from many different environments (Tsui 2015). These environments represent the cultural clashes a teenager encounters as they grow older.

Since adolescence is a time of new and ever-changing experiences, one’s surroundings have the most impact on their values and beliefs. A study from the Journal of Adolescence tested early and mid-adolescents on how age impacted culture’s influence on self-esteem. Researchers noticed that culture’s influence decreased as their respondent’s age increased (Benish-Weisman et al. 2015).

They alluded to the fact that culture’s effect on an individual’s behavior is strongest during adolescence. Experts claim that their self-concept is still malleable; therefore, cultural pressures will have a larger impact on their development (Bleidorn et al. 2016). These pressures reflect biological and sociocultural influences placed upon young individuals.

It is interesting to analyze the behaviors of immigrant children or children of mixed race in particular, as cultural clashes in their lives are more apparent.

Immigrant children in the United States often face cultural differences in their multiple environments at school, home, and other areas. These all add up to cultivate their identity (Flynn 2003). A switch in environment will likely result in a switch in social constructs and values (Daniel et al. 2016), which is why most foreign children find themselves struggling to define themselves as individuals. Similarly, teenagers of mixed race often find themselves at ends with their self-concept. Racial categories have formed the basis of the identities of many, and “what” a person is seems more important than “who” they are (Tsui 2015). Value differentiation is the idea that helps us understand that the value a culture places on certain concepts can influence and cause discrepancies in self-esteem across adolescence (Daniel et al. 2016). Comparing these values can aid in determining the level of self-esteem exhibited within adolescents.

It is important to compare and contrast the differences across cultures surrounding adolescent self-esteem to get a closer look on how they impact the youth. Self-esteem might not be present in the same way in certain groups of people simply because it is not valued in the same way in their culture or environment (Daniel et al. 2016). This relates back to value differentiation; the idea that the importance a culture places on a certain idea will dictate how they perform on tests surrounding that idea (Daniel et. al 2016). Even certified tests like the Rosenberg Self-Esteem Scale (RSES) might not be as effective because different cultures have various understandings of self-esteem and the overall self-concept (Gnambs et al. 2018). The RSES might not be as relevant to their cultures’ values or beliefs.

The paper Seeing Oneself Positively in Different Cultural Contexts compares Western cultures to Eastern cultures; the former values individual freedoms while the latter values conformity and tradition (Becker, et al. 2014). Western culture prides self-esteem as something everyone possesses and should constantly strive to improve (Flynn, 2003). In the Journal of Cross-Cultural Psychology, studies revealed that adolescents of Eastern cultures like China, Japan, and India scored lower on the Rosenberg Self-Esteem Scale than their Western counterparts in the Americas or Western Europe.

The idea is that culture has such a large impact on adolescent self-esteem, that the beliefs or values of that culture can determine a teen’s perception of their worth. These concepts are fairly evident, but it will take more than facts to make a change. During adolescence, one’s self-esteem constantly fluctuates, and cultural differences have more of a presence at that time (Helwig, et. al). If one’s environment depletes one’s sense of self and accomplishment, one’s self-esteem will be low (Manning 2007).

In America, consumer culture of the modern era has altered the adolescent mind. The possession of popular commercial brands has a great impact on the modern adolescent’s self-esteem and how they feel they fit into society. This is just one of the many examples of how the values and social constructs associated with a group of people can alter the self-esteem of a young individual.

These examples should be more than simply identified; concrete information and data surrounding them should be collected. Surveys aid sociologists in gathering data from sample groups to create complex ideas involving prevalent topics in their environment. Questionnaires like the Rosenberg Self-Esteem Scale (RSES) have helped spread knowledge about the presence of culture on self-esteem (Gnambs et al. 2018). The RSES comprises 10 questions with answers ranging from “Strongly Agree” and “Agree” to “Disagree” and “Strongly Disagree.”

A study from the Archives of Scientific Psychology utilized the RSES to reveal the relationship between cultural backgrounds and age when it comes to self-esteem (Helwig et al. 2017). Data from this study helped reveal that socio-cultural backgrounds actually moderate the presence of high or low self-esteem across age groups. Wellness models like the “indivisible self” promote positive behaviors in teens and unveil tools that will help improve their self-esteem (Myers, et al. 2011). Specifically, this model includes creative, physical, essential, social, and coping mechanisms for maintaining one’s self-esteem. If these models were distributed in schools across the country, and taught to students, its impact would be extraordinary. A scale was given to 18 individuals on a 3-part survey to rate the level of importance of different ways used to promote resilience. Significance was placed on the positive command climate. Placing importance on culture and positive environments will help promote positive self-esteem. Resilience is the capacity to cope with a crisis or recover from difficulties (Meredith, et al. 2011).

There was a total 80 recipients: 67 were female and 13 were male. Regarding grade levels, 12 students reported to be in 9th grade, 52 in 10th, 14 in 11th, and 2 students in 12th grade. On average, many students had 4 to 5 people in their family. About 88 percent of students reported participating in after-school activities, and a majority claimed to take part in 2 to 3 activities. A majority of students felt that they possessed a number of good qualities, and only 8 percent disagreed with that statement. Over three-quarters of students feel positive about themselves and their abilities. Although this is good, there are many variances. Over three-quarters of students wish they could have more respect for themselves, and the same number of students feel useless at times. Over half of students feel that they are no good at all.

These differences support the claim that cultural aspects can lead to fluctuation in self-esteem. One’s gender, race, family size, and outside activities can all affect how they see themselves in relation to their peers and society. Now with this information, respondents will be able to analyze how their internalized values and outside activities can influence their self-esteem.

Not only does culture contain an individual’s familial background, it plays a role in the level of self-esteem in the adolescent. One’s physical, social, political, and economic environments shape how one sees themselves in society. There are many factors that influence an adolescent’s perception of their worth, and culture encompasses all of those factors.

Many journals and professional studies have highlighted the fact that the values teens internalize have a big impact on how they measure their worth. It is important to look at self-esteem from a cultural aspect because one can highlight certain differences that cause variations in it, ultimately allowing people to realize what a huge impact culture has on self-worth.

With my research, I now have a better understanding of the topic, and my own study supports the claim of some of the scholars. Promoting positive self-esteem creates a generation of socially conscious individuals who can grow together as a community. With collaborative coping mechanisms and avid discussions concerning cultural differences, adolescents will not only improve their self-esteem, but encourage others to as well. 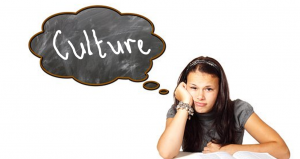