On December 14, 2016, The Sociologist (TS) interviewed Amitai Etzioni, who is the first University Professor of the George Washington University. From 1987 to 1989, he served as the Thomas Henry Carroll Ford Foundation Professor at the Harvard Business School. He served as Senior Advisor to the White House from 1979 to 1980. Professor Etzioni served as the president of the American Sociological Association from 1994 to 1995. Outside of academia, Professor Etzioni’s voice is frequently heard in The New York Times, The Washington Post, and The Wall Street Journal and in appearances on network television. In 2016, a bill was introduced in Congress to implement his proposal to save 25,000 Syrian children. He is the author of 24 books. Below are excerpts from the interview.

TS: What are the three most important insights you can share from your distinguished career?

Amitai Etzioni: One is that there are no good wars— even when the cause is just—there are no good victories. All sides end up suffering; that was my personal experience when I was in combat. And ever since then, I have used my writing and being active to try to prevent wars and violence. My second insight is: if you want to be an active academic, you have to pay for it. Many of your colleagues will not appreciate it.

So I advise my colleagues who plan to be politically active to note that if you want to be in the kitchen you must be ready to stand the heat. Finally, this might be the most difficult one to follow; we spend so much time and our energies on academic politics, the less you fuss about them, the more contributions you can make to society.

TS: How has sociology improved our world?

Amitai Etzioni: I will give you a very precise and short answer: far from enough. I think sociologists have excellent tools, to help change society, much better than economists, much better than psychologists, but we—many of us, not all of us —are into this science game. You cannot publish an article in many journals without some regression analysis or some highfalutin academic jargon and you miss the kind of articles that C. Wright Mills, Daniel Bell and Robert Nisbet wrote with strong intellectual and public power. I guess there is room for academic papers, in the narrow sense of the term. What sociology can do for the world is that we could do more work for change. I know that there are many urgent missions now and sociologists would do so much better than, for instance, the Generals. Look what happened in Iraq and Afghanistan; many lives could have been saved and billions of dollars could have been saved if sociologists would be more active; would be listened to by the White House and Congress. 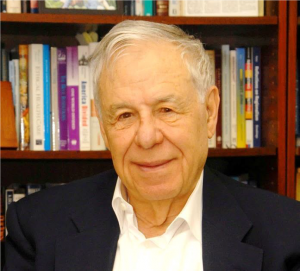 TS: How do we get the people in power to listen to sociologists?

Amitai Etzioni: Surely part of it is, whether you have something significant to offer. There are two sides to it. It is often the case that it is not only that they won’t listen to us, but we don’t often have a solid shared opinion. The economists, they have shared storylines. We don’t. If you call 5 sociologists, you get 5 different answers.

TS: So the problem is lack of consensus?

Amitai Etzioni: Yes, lack of consensus not in the political sense, but in a scientific sense. I once tried a simple sentence: “individual action is, to a large extent, determined by the group or groups of which the person is a member.”

I thought it was a completely safe sentence; but there were a lot of people who thought you could change people one individual at a time. I could not get my colleagues to sign off on the idea.

Economists also disagree with each other, but take free-trade, for instance, most economists will sign off on free trade. I don’t know anything that all or most sociologists will sign off on. We would have to have a roundtable for several years before we can get to them!

TS: Could there be a project to compile the contributions that sociology has made?

Amitai Etzioni: When I say my prayers every evening, I pray for that; God has not delivered that yet!

TS: If you were to pick the top findings, based on your distinguished scholarship, what would be your top choices?

Amitai Etzioni: I would say bonds of community, the exaggerating points of individualism, and the most important force for social change are social movements, not parties, not individuals, not leaders, but social movements.

Amitai Etzioni: I think there are still high tensions among the racial groups, as you can see from their different descriptions of reality and surely the Trump Campaign has contributed to the tensions. On one hand, we are not proceeding in a good direction. On the other hand, despite these very troubling developments, the U.S. is doing much better than Japan, South Korea or most of Europe in these matters. We have a long way to go in the U.S. but oddly enough we are doing better than many societies.

Amitai Etzioni: This is because the other countries are highly homogenous middle-class societies. Take Denmark and Sweden, which are not used to having racial diversity; the U.S., because it
was built on immigration to begin with, has much higher level of diversity and it has learned to deal with that. The other countries never had to and never had this level of diversity. Germany now has about 1 million Muslims.

TS: What are the problems of group identity, when it comes to fostering inter-community relations?

This is what happened after the Civil War; before the Civil War there were two different societies in the U.S. and we paid a very tragic price. In the 1870s the project to build one American society advanced, though that project has not been finished.

There has to be an opportunity for a shared value or mission in enough parts to override particularistic commitments. I am very worried about community relations in the U.S. and quite troubled that we are about to enter a dark age. Internationally, it is not clear to me where we are going. I just agreed with the University of Virginia Press to put to bed my book Avoiding War with China, and so I think if we can avoid major war, that should be our target for international relations.

TS: Who is your hero or mentor; who has inspired you?

Amitai Etzioni: When I came out of the Army, I was a student of a philosopher called Martin Buber; he was a pacifist and a strong communitarian and he had a lot of influence on me and I continue to embrace his vision – I never became a pacifist but I became a peacemaker because of my experience in war.