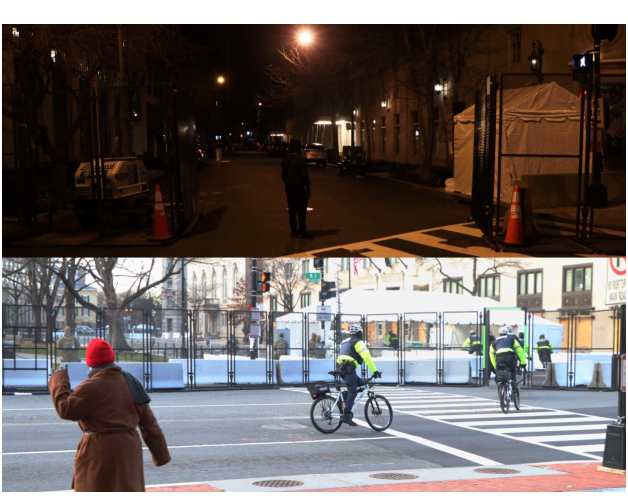 I think change can be a proofless endeavor, much like watching paint dry. Except in this instance the paint never becomes dry enough for you to decide if what you have covered up is made any better by your efforts. Watching fences is a lot like that.

Editors’ Note: Fencing was erected around the White House in June 2020 in response to the Black Lives Matter protests in front of it sparked by the murder of George Floyd. A portion of this fencing at Black Lives Matter Plaza became host to BLM-related protest signs, art, and memorials, curated unofficially by Nadine Seiler beginning August 2020. This stretch of fence became known as the Black Lives Matter Memorial Fence. Beginning October 2020, counter protestors began trying to destroy and deface the display. Volunteers, most often Seiler and Karen Irwin of the William Thomas Anti-Nuclear Peace Vigil, began maintaining a presence at the fence to prevent this. Over the weekend of January 30th 2021
Seiler and other volunteers dismantled the memorial and photographed it for archival purposes. The physical components are spread among Howard University, the Library of Congress, and storage care of Seiler and Irwin, with a small portion used as a traveling display. Digitally, every fence item is being scanned by Enoch Pratt Free Library for archival purposes, and there is a digital photo album publicly available of the fence as it stood. 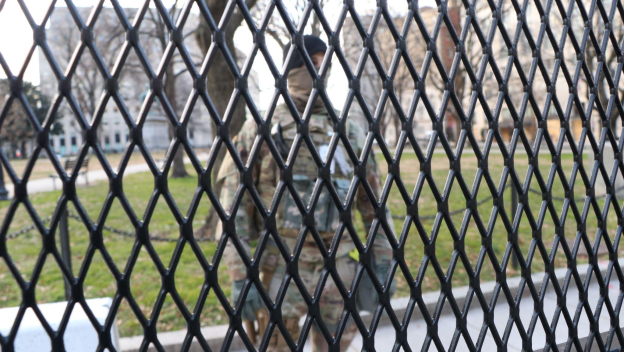 Fences by their design mark a line, one that cannot be seen. Yet the two sides are so delineable they need
to be marked or kept apart physically. This could not have been made any clearer than by the events of
Jan. 6th. When I went out to cover the Capitol Hill riots around 3 p,m., I never reached the Capitol. There was so much hostility and violence all around the city, I only made it to 16th and I street. My appetite for watching my fellow citizens tear each other apart was full by 5:30 p.m. 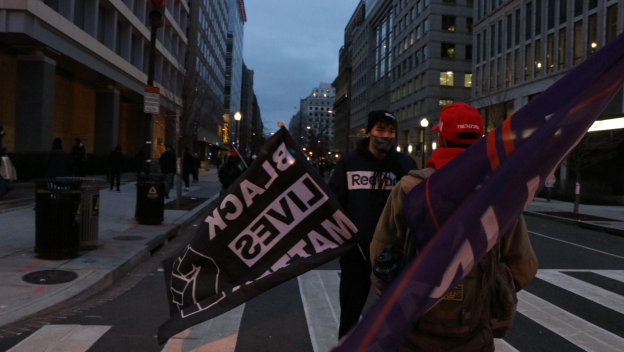 I watched Black Lives Matter protestors from Southeast D.C. maintain their ground after round after round of clashes with Trump supporters, who amassed on the other side of the street while DC bicycle police just sat by, watching. It was obvious there was nothing off limits. After witnessing the pepper spray, the knockouts, the push and pull of what seemed to be full-on 1950’s street warfare, it became apparent why that fence was around the White House. That fence which, at the time, was much more representative of a mausoleum to injustice, is gone now but the injustice it came to represent remains. 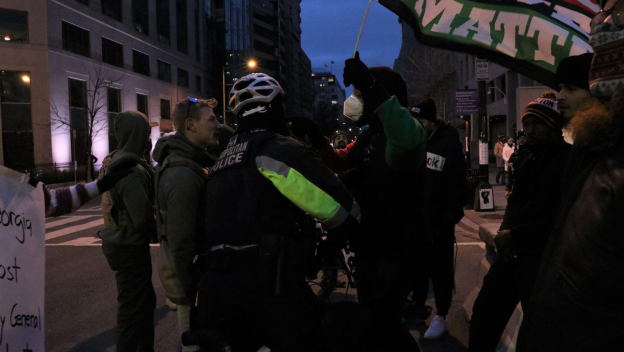 Going out the nights before Biden’s inauguration was a surreal experience. Seeing the map of the proposed “Green Zone” in The Washington Post struck me like lightning. Studying political science, I had only heard the term “Green Zone” in reference to the heavily fortified portion of central Baghdad during the Iraq War. It would hurt the heart of anybody who believes in a peaceful exchange of power through a time-honored democratic process, to have a need for a “Green Zone” in a metropolis such as D.C. in peacetime. Yet, I wanted to see it for myself, all of it: the construction, the methods, the
checkpoints. I wanted to see something that no one had seen in almost 80 years: what D.C. would look like in a time of war.

When I got to Black Lives Matter Plaza a few nights before the inauguration it was a rather solemn
group. The decades old Non-Nuclear Proliferation Treaty Group had a couple of lifers (protesting since the late 70’s) who had been pushed out of “The People’s Park” in front of the White House when
the first fence went up in June 2020, in response to the George Floyd protests. That night there were about four other people there who had been watching the fences for weeks before I arrived. This group became collectively, if not unofficially, as “The Fence Watchers.” 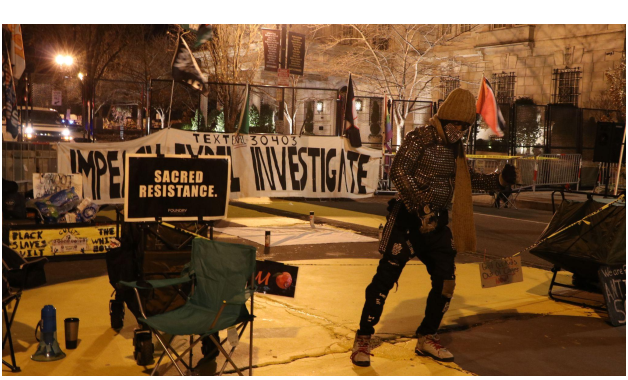 The energy on inauguration morning was a strange concoction of pure jubilation and apprehension. As the morning turned to day the mixed apprehension gave way completely to a tide of joy and celebration. It felt good, it felt right, it felt like, maybe the tide was indeed turning. And there we were, right in the middle of it all, with a little cordoned-off area (simple caution tape) that we put up the night before so our and the long-term residents’ things wouldn’t be lost in celebration. We were there, with control of a 600 watt speaker and a playlist, on the fence. 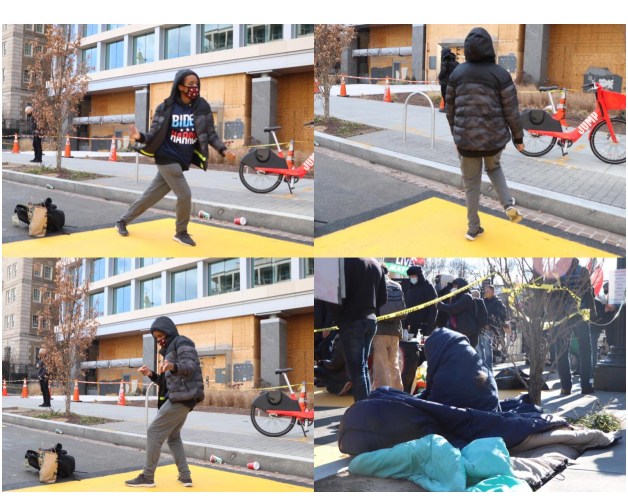 Overnight I watched the crowds diminish into the same few of us, cold and clustered fence watchers. However, now we were joined by two or three local homeless people, whom we began to refer to more lovingly as “long term” residents. The night was still, it was not exciting, there was no party at 4 am, and it went back to much as it had been before: solemn and quiet. However, the rising sun would bring a day that I began to refer to as “Day Five.” Even the other watchers who had been there more than five days began to call it “Day Five.” It was a coordinated plan of racism, bigotry, trolling, and pure hate. First, a member of neo-fascist group the Proud Boys, who we would see many times later, came by pretending to be an ardent supporter of “White Jesus.” He came equipped with a Valkyrie horn, a symbol Proud Boys and other white supremacists carry to merge Old Norse religion with a mythos of Aryanism and White racial purity. The problem, which I pointed out to this man, was that that was a pagan symbol. No one who supports a fundamentalist Christan viewpoint would carry it. I knew he was faking to upset this woman, but why? I would soon come to find out. 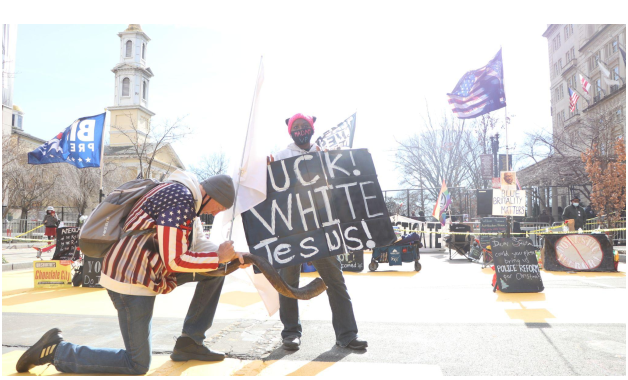 The goal was to make the fence watchers and other BLM supporters look like “a bunch of angry black people”. After “White Jesus” man ran away, a second man livestreaming on his phone got right in the face of a Black person angered by the first man. I can still hear his narration: “This is what the BLM movement is, just a bunch of angry black people…” (The livestreamer was also present at BLM Plaza on April 20th this year, the day Derek Chauvin was found guilty of murdering George Floyd. He showed up in an all-blue suit and started yelling a bunch of “stop the steal” nonsense at the media before being escorted away.) This is when I realized that the “White Jesus” man and the livestreamer
had coordinated their actions. The day progressed with more coordinated acts of intimidation and harassment, strange believers in the QAnon conspiracy theory, and right-wing nonsense. There were a series of men, only ever in groups of two, who would sit on the far end of BLM Plaza and take reconnaissance photographs. One would spot with binoculars and the other would take three pictures left-to-right across the fence. When they turned to leave I noticed that strange white Proud Boys cross emblazoned on an all-black sweatshirt. I started to feel fear, real fear, of what could happen. 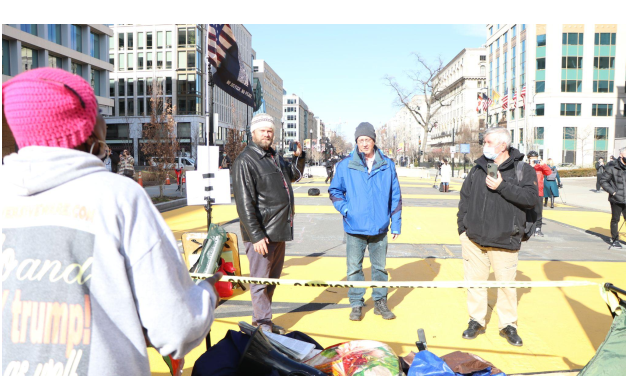 That night was tense; I remember all of us being on edge, looking at every person that walked near the Plaza with great scrutiny. As time went on, however, and night turned to day, nothing happened. No attack, no pepper spray, no nothing; just still, cold, morning. The next night as I walked to the plaza something quite unexpected greeted me. The second fence was gone. The fence watchers were back to the White House fence, doing what they had been doing before: keeping people from walking by and ripping people’s pictures, memorials, and art off the fence. It felt like a victory. The problem was, this was a small victory in a long war of attrition. 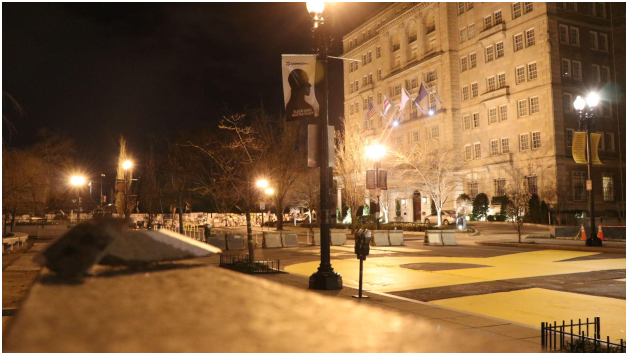 The daily tasks of chasing away Trump supporters and Blue Lives Matter supporters who would vandalize the fence, providing water and food for the long-term residents and ourselves, and talking to people about the importance of the right to peaceful protest, would give way to nights of cold hands and freezing toes. Police, who were always there watching us, would intentionally run their lights and blare their sirens at 4:30 a.m. to wake the homeless and the few watchers who would be trying to get their first hours of rest of the night. It made me start to question, what was the permanence of anything we were doing? What happens when everyone just decides to leave? 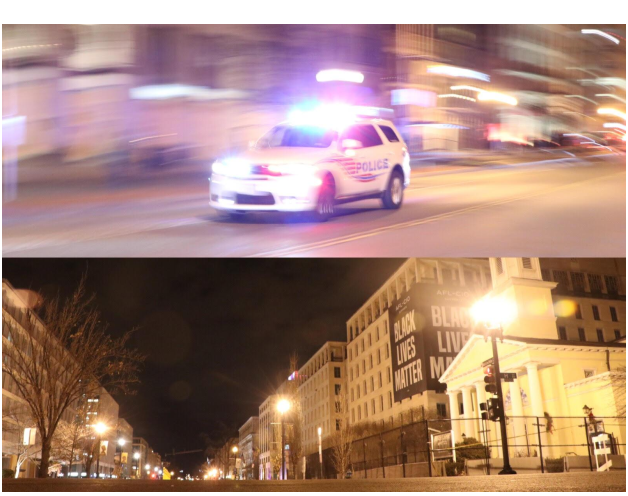 I started to look into ways to make the effects of our sacrifice more permanent than just a few shared memories. The first, I thought, was preservation. I thought the fence’s pictures and art needed to be thoroughly documented and cataloged, at least in pictures and at best in a permanent exhibit. This, somewhat, happened. I say somewhat because I saw how they were cataloged; I saw the items leave and who took them. It must have been what it was like at the end of World War II somewhere, seeing the great stolen works of art, loaded into crates, knowing most of them the world would never see again. I looked into having the actual yellow letters that were painted on BLM Plaza to christen it made into a UNESCO World Heritage Site. Besides not qualifying by age, there was so much other red tape that after a few months it became apparent that without more resources or more outside interest, it was not going to happen. So there I was one Saturday, and the other fence watchers, mostly out-of-towners, were leaving. Like Bush in 2003 on that aircraft carrier. Mission Accomplished!!! Accomplished what? Getting written up in an extremely stilted article in The Washington Post to show your friends? The truth was the fence watchers were gone, the memorials and “in remembrances” on the fence were gone,
and the injustice continued on and on. Ask Andrew Brown Jr. and Michael Hughes, both killed at the hands of police since the Derek Chauvin guilty verdict, if anything has changed. No accomplishment, no change, just like watching paint dry in a monsoon. 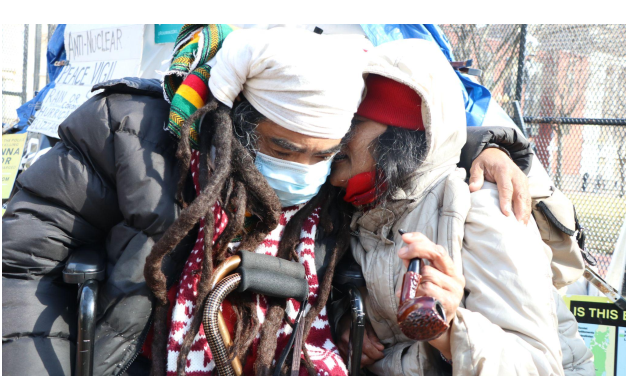 I suppose what I witnessed or learned was that change requires sacrifice. For some, that sacrifice is comfort, time, money, friends, or family; for too many others that sacrifice is compulsory and too often means life itself. In this way, it is very different from watching paint dry. People move on, they forget, they feel like they have sacrificed enough, but for too many oppressed in this country, they don’t get to go home or leave the fight behind. The injustices and the sacrifice follows them wherever they go. The experience left me feeling empty, disappointed, tired, and at a loss as to how so many could care so little. Then it struck me: if I felt this way, allowed by my skin color to leave the struggle somewhere else and
go home, then I had not sacrificed a single thing. The injustices that plague this country are often and everywhere. In this light, I suppose watching fences matters after all…